These statistics are drawn from ABC’s daily surveys of more than 50 newspapers, websites, and blogs. The majority of these executions have been announced by the authorities themselves or reported by the semi-official media inside Iran. The exact number of executions is difficult to assess, however, as the reports are not always systematic and complete. Moreover, the Iranian authorities do not allow the independent investigation and monitoring of cases in which the death penalty is enforced. The numbers above include only individuals executed after formal judicial proceedings and do not include any who have died in detention or those assassinated or killed by security forces. 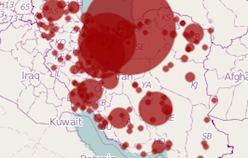 An Interactive Map of Flogging Sentences issued in Iran

Corporal punishment that amounts to torture or cruel, inhuman, and degrading punishment, including flogging, is prohibited under international law, and countries cannot justify it by invoking domestic law.

To Fight Discrimination, Iranian Women Need Structural Change
The International Community Must Stop Iran’s Assault on the Right to Life
Thank You for Helping to Keep the Hope of Justice Alive
A Victory against Oblivion: UN Experts hold Iran Accountable for the 1988 Massacre of Political Prisoners
View More ❯

Today, in honor of the 19th annual World Day Against the Death Penalty, Abdorrahman Boroumand Center for Human Rights in Iran (ABC) highlights a group whose rights were targeted soon after the 1979 revolution: women.
Read More ❯
The recent kidnapping plot against Masih Alinejad fits a decades-long pattern of intimidation, extrajudicial killings and abductions of dissidents meant to undermine political and religious groups, silence activists and journalists, and prevent the mobilization of effective opposition movements inside and outside the country. Most concerning to activists is the encroachment of Iran’s intelligence into the US, where no assassination or kidnapping attempt against had been reported for over three decades.
Read More ❯
Saleh Shariati’s freedom follows a nearly decade-long ride on a roller coaster of hopes and disappointments, in an Iranian judicial system where a combination of punitive and arbitrary criminal laws and widespread failures of due process routinely endangers, and sometimes takes, innocent lives
Read More ❯