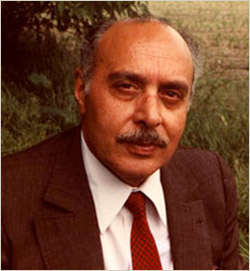 Dr. Abdorrahman Boroumand was born into a farmer/landowner family from Esfahan in 1927. He studied law at the University of Tehran and the University of Geneva, where he obtained his Ph.D. in 1956. While a student, Boroumand supported the political program of then-prime minister Dr. Mohammad Mossadegh, a respected statesman and champion of democratic reform. [Between 1951 and August 1953, when his government was ousted by an Anglo-American sponsored coup, Mossadegh was engaged in a multi-front political battle to reform Iran's electoral law and to implement parliament's decision to nationalize the British-owned oil industry.]

In 1956, Boroumand chose to return to his hometown and serve his country rather than accept an opportunity to work in Switzerland on international law. After returning to Esfahan, he joined the National Front, a coalition of pro-Mossadegh groups and individuals. He was among the very few National Front candidates to run in the parliamentary elections of the 1960s. A democracy advocate and charismatic speaker, he gathered unusual popular support and was arrested twice on the eve of the 1960 elections. He spent several weeks in prison before being barred, by the political police, from living in Esfahan. He settled in Tehran with his family and worked as a lawyer.

Boroumand remained involved with the pro-democracy movement and was elected to the Council of the National Front in 1963. The political repression that prevailed in Iran in the 1960s and 1970s, however, left no space for peaceful political activism. Boroumand limited his activities to maintaining a network of support for political friends who found themselves in difficulty. He also took care of his family's business ventures. Only in 1976 did a limited political opening allow the pro-democracy movement to reorganize.

The revolutionary turmoil of 1979 was a major turning point in Boroumand's political life. He was one of the few high-ranking National Front members who supported Dr. Shapur Bakhtiar's decision to accept the premiership of Iran in January 1979 in an effort to ensure a peaceful transition to democracy. Bakhtiar, a social democrat and one of the three leaders of the National Front, opposed Ayatollah Khomeini's idea of an Islamic republic. When the National Front Council expelled Bakhtiar, Boroumand resigned in protest. In January 1979, Boroumand was sent to Paris to arrange a meeting between Bakhtiar and Khomeini. The meeting never took place, and Bakhtiar's government was overthrown on February 11, 1979. At the time, Boroumand was in Paris, where he stayed and was granted political asylum.

In August 1979, Bakhtiar arrived in Paris and declared his opposition to the Islamic Republic. Boroumand joined him and placed his apartment, in a Paris suburb, at the disposal of Bakhtiar. It was in this apartment that, in July 1980, a first assassination attempt was carried out against Bakhtiar by a Palestinian commando hired by the Islamic Republic. Bakhtiar was not harmed but the attack resulted in the deaths of a French policeman and a neighbor. It was also in this apartment that the National Movement of the Iranian Resistance (NAMIR), the first pro-democracy opposition movement to Iran's theocracy, was founded in August 1980.

Along with Bakhtiar and his friends, Boroumand played an active role in the creation and development of NAMIR. He was not deterred by the danger inherent in such an endeavor. On April 18, 1991, Boroumand was stabbed to death in the lobby of his Paris apartment by agents of the Islamic Republic. Three month later, on August 6, 1991, Bakhtiar and his assistant Soroush Katibeh were also killed by three agents of the Iranian government.

Boroumand described the political regime he was fighting for in the following terms: "NAMIR aims at restoring national sovereignty in Iran. National sovereignty means that people would enjoy democracy in domestic affairs and independence in international affairs. By democracy I mean the rule of the majority, while all political and social rights of the minority are respected so that the minority gets the opportunity to become the majority. This is not a new goal. This was also the ideal of all the patriots and freedom lovers in our country since the constitutional revolution of 1906."

Boroumand believed that every citizen has a duty to be involved in the affairs of his country. He loved history and enjoyed Persian classical literature. He valued family and friendship and was a loving relative and a loyal friend. Yet for him the dignity of Iran and the liberty and rights of its people were a sacred goal, one for which he gave his life.

The Abdorrahman Boroumand Center--including its first project, Omid, a Memorial in Defense of Human Rights in Iran--is dedicated to promoting Boroumand's ideals. Its creation also sends a message to the proponents of terror: Using violence to eliminate their opponents will not succeed in eliminating their ideas. Indeed, the memory of their victims challenges the collective conscience of a nation and spurs many to fight for freedom and human rights. Killing an opponent may delay, but it surely will not end, the quest for freedom, as the desire for liberty is inherent in human nature.