What Happens to Murder Rates when the Death Penalty is Scrapped? A Look at Eleven Countries Might Surprise You

Some tout the death penalty as the most effective deterrent the legal system has at its disposal. Such people believe that if the death penalty were to be abolished, it would lead to an increase in violent crimes for which it is foreseen, like murder. Others argue that the death penalty is not an effective crime deterrent and that alternative approaches have a greater impact in reducing such crime. Given that a majority of the world’s countries have done away with the death penalty in law, the debate is not speculative: we have data available to test these claims.

According to Amnesty International’s report on the death penalty in 2017, 106 countries have abolished capital punishment. Formal abolition, rather than a moratorium in practice, is key to the argument, since it may be reasonably assumed that only in a country where potential criminals are certain they stand no risk of capital punishment, and where governments are publicly and legally committed not to use it, that any deterrent effect would be null. Furthermore, abolition must not have followed a moratorium of long duration, as it may be reasonably assumed that formal abolition would not have the same effect in countries where the death penalty had not been carried out in practice regardless of its legal status (e.g. Mexico, where official abolition in 2005 trailed the last non-military execution by nearly seven decades.)

For purposes of this investigation, we will plot data for countries which both a) formally abolished the death penalty and b) implemented a capital sentence at least ten years prior to abolition. Data is not available for all such countries: some did away with the death penalty before standardized criminal statistics became widespread (e.g. Venezuela in 1863, Portugal in 1867), while others abolished so recently that yearly statistics cannot be used to plot a meaningful pattern (e.g. Guinea in 2017, Benin and Nauru in 2016).

Data compiled by the World Trade Organization is available for eleven countries meeting these conditions, from a variety of geographical and cultural settings: Azerbaijan, Bulgaria, Poland, Serbia, Estonia, Latvia, Ukraine, South Africa, Kyrgyzstan, Georgia, and Albania. Their intentional homicide trends (number of annual murders per 100,000 people) are plotted in the chart below, starting at the year of abolition (“1” on the x-axis) and continuing through the tenth year after abolition (“11” on the x-axis). In order to more readily compare trends, y-axis values are not given absolutely, but relative to each country’s year of abolition baseline (thus 0 at “1” on the y-axis): 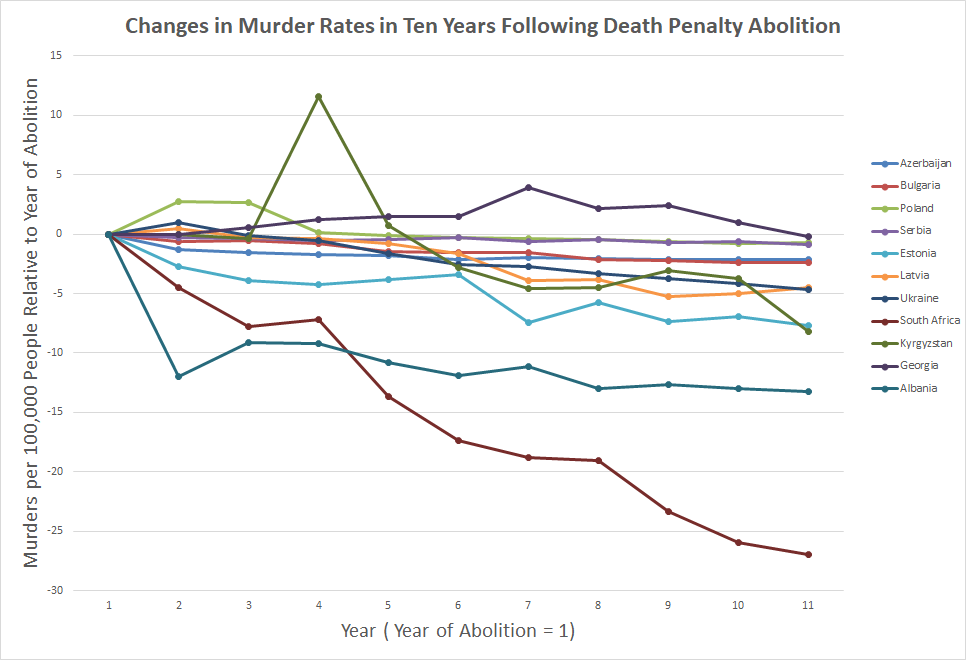 Among the eleven countries, five register any positive values on the y-axis, meaning that in the ten years following abolition they experienced a murder rate higher than that of the year of abolition for at least one year.

For Latvia and and Ukraine the difference was minor, never rising to more than an additional one annual murder per 100,000 people. As indicated by the trend line in red, each of these countries experienced an overall decrease in murder rates despite these single-year fluctuations. 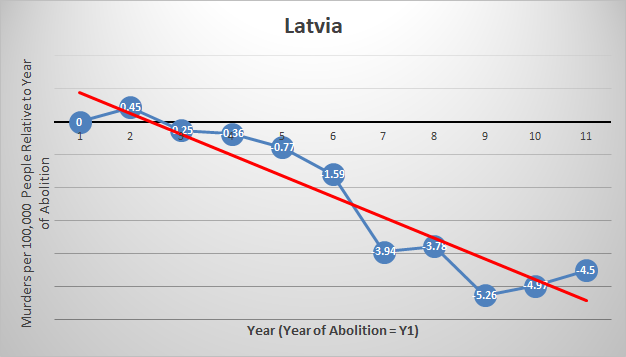 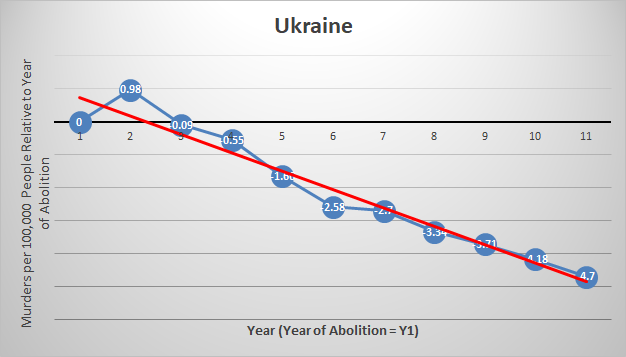 Poland exhibits a slightly higher uptick for three consecutive years (to a maximum of 2.77 murders per 100,000 people) before a consistent decrease. 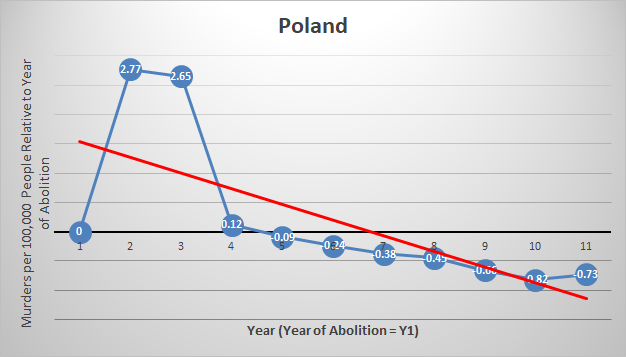 Kyrgyzstan shows an appreciably higher upper limit (11.56) - a trend that might be reasonably termed a “spike.” Kyrgyzstan's homicide rate nonetheless decreases overall in the years following abolition, as indicated by the downward slope of the trend line. 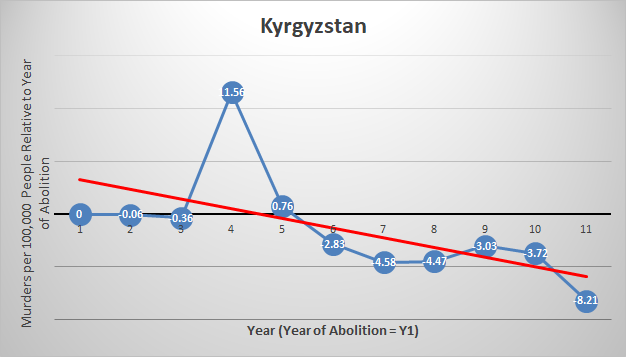 Georgia is the only country which exhibits an overall positive trend. A gradual rise in the murder rate peaks seven years after abolition at an additional 3.9 murders per 100,000 people, before again sloping down to a Year 11 rate which is slightly lower than the Year 1 baseline. 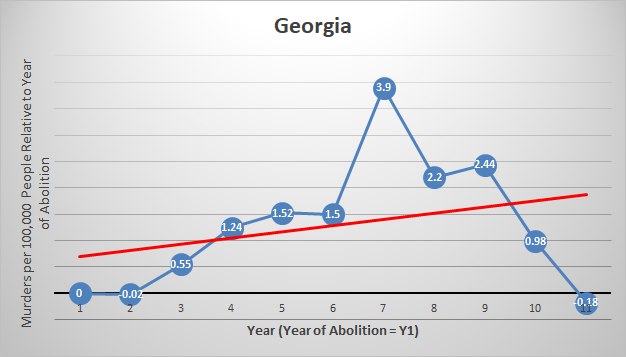 Meanwhile, six countries - Azerbaijan, Bulgaria, Serbia, Estonia, South Africa, and Albania  - exhibit only negative values on the y-axis, meaning that at no time in the ten years following abolition did they experience an annual murder rate as high as the year of abolition. All show downward trend lines as well, representing a decrease in murder rates. 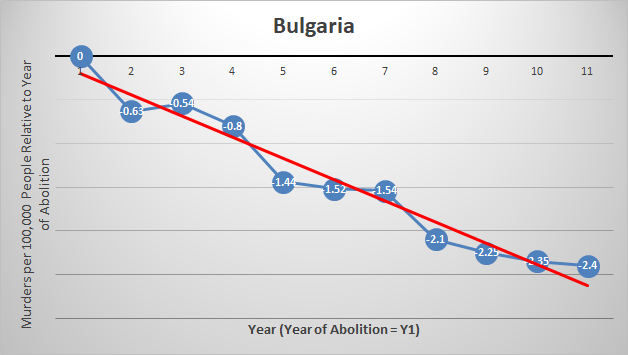 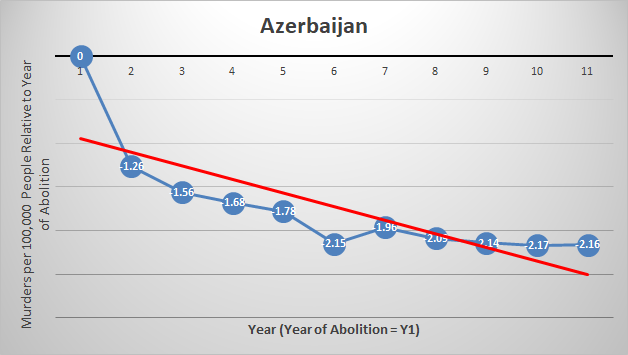 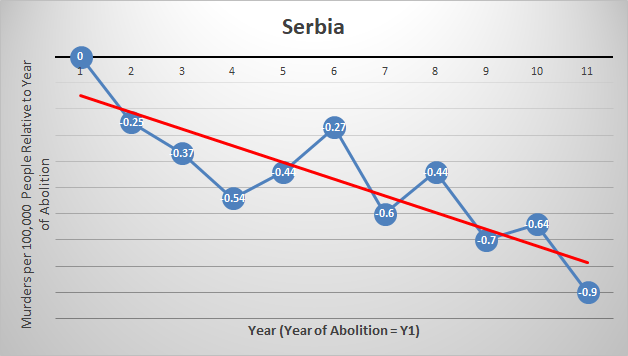 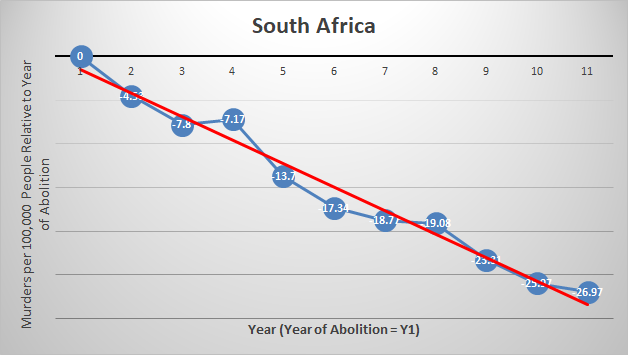 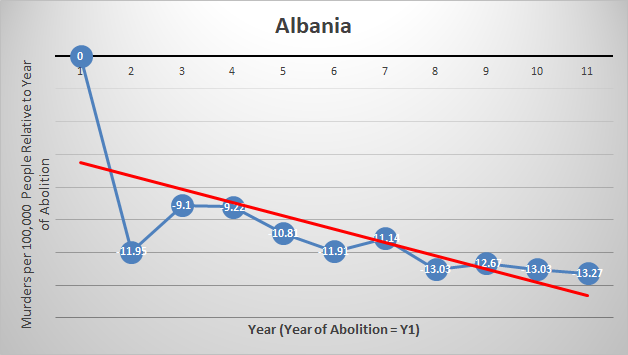 We see that in eleven countries which have done away with the death penalty, only one witnessed a general rise in murder rate in the following decade. But just how big was that rise, and how does it compare to the downward trends of other countries? Imagine a situation where the downward trends in ten countries were so minor, and the spike in the eleventh country so pronounced, that the overall trend was toward a higher a murder rate. Policymakers might then argue that abolition was not worth an uncommon but extreme risk. To test for this possibility, we plot all ten data sets together with an overall average trend line (shown in red): 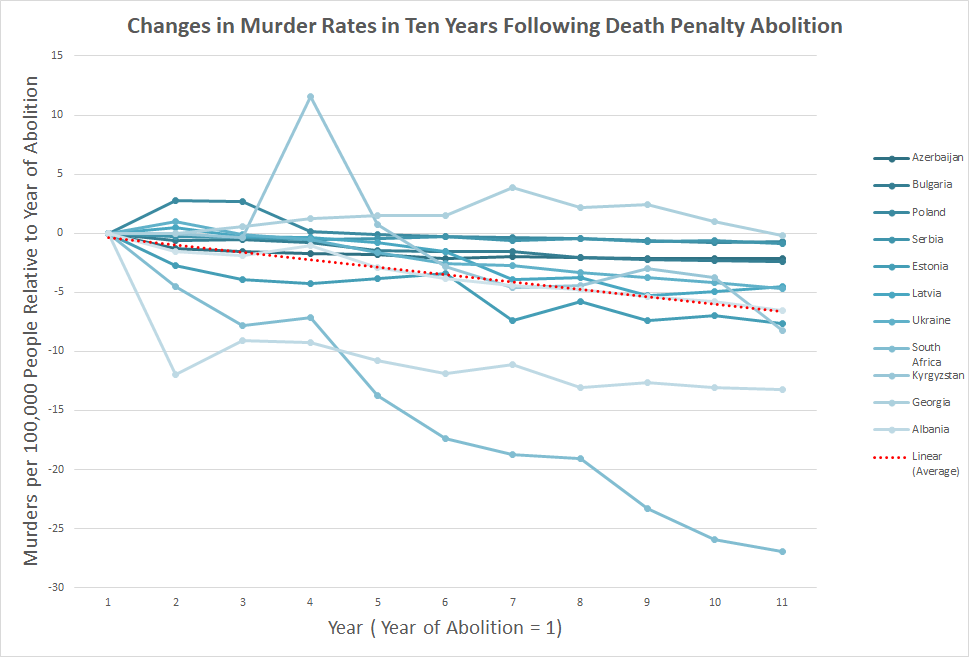 As these graphs demonstrate, death penalty abolition correlated on average with a decline in murder rates in eleven countries for which data is available. In fact, as the last graph’s trend line indicates, a country in this set which abolished the death penalty could expect an average of approximately six less murders per 100,000 people a decade after abolition. Death penalty advocates’ fears that the state relinquishing the ultimate punishment will embolden potential criminals, or at least weaken deterrence, prove to be unfounded in light of this evidence.