Iranian leaders like to claim capital punishment is an essential part of their cultural and religious heritage which cannot be reformed. The majority of the greater region's countries, Muslim-majority or otherwise, beg to differ. Below, we profile nineteen nations culturally, religiously, and geographically comparable to Iran who have all done away with the death penalty in law or practice.

Iran's judiciary is straggling behind the world standard. Since the beginning of 2010 alone - a time when the countries below did not put a single person to death - Iran's judiciary has executed more than 6,000 people. Why execute in Iran? The world knows better. 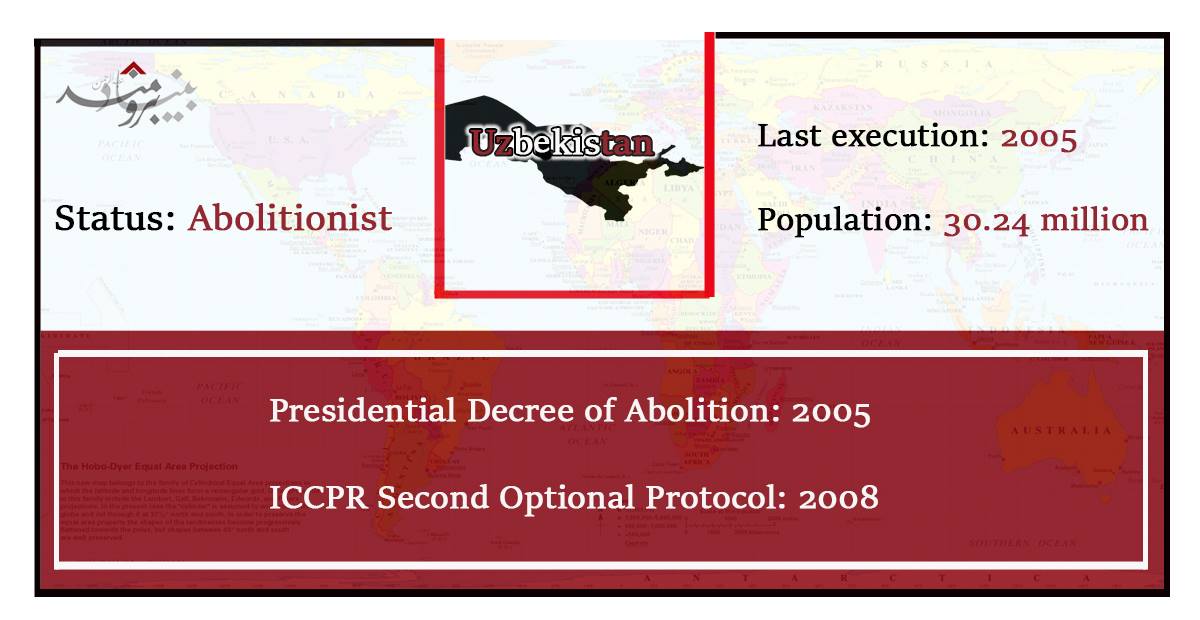 Iran's northern neighbor Uzbekistan hasn't executed a single person since 2005. That year, President Islam Karimov issued an order toward ending capital punishment “based on universally accepted principles and norms of international law, provisions of the Constitution of the Republic of Uzbekistan, which stipulate and enshrine the right of persons to life, and in order to realize specific measures to further liberalize the criminal punishment." Uzbekistan ratified the ICCPR Second Optional Protocol in 2008, committing itself it to unconditional abolition in international law. 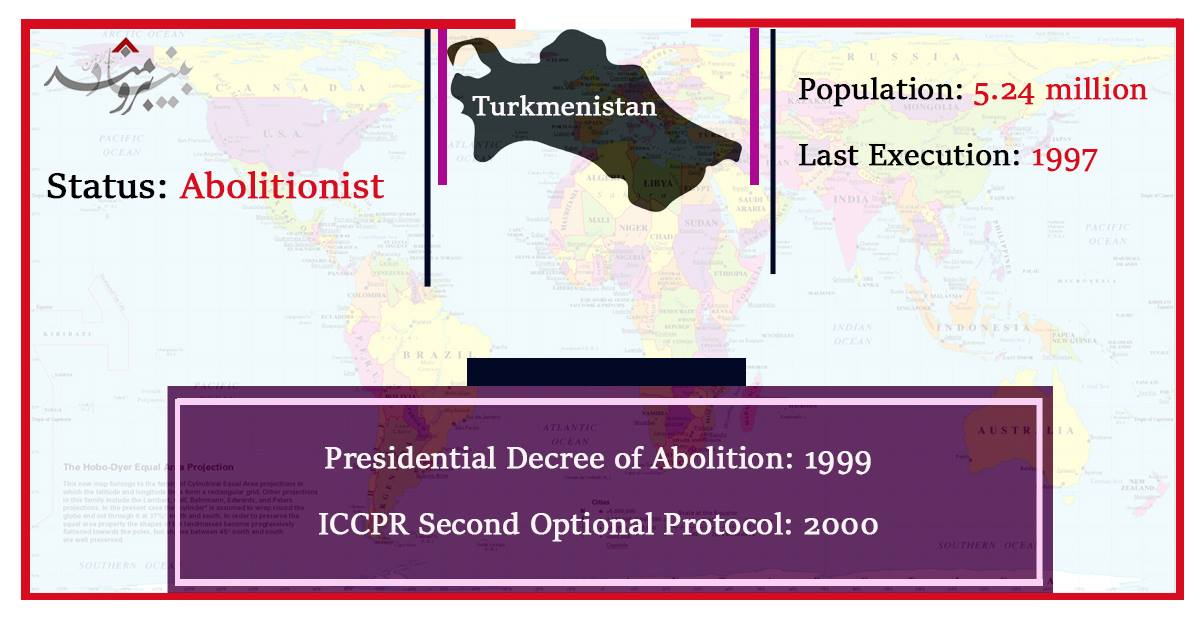 Iran's northern neighbor Turkmenistan hasn't executed a single person since 1997. In 1999, President Sapamurat Turkmenbashi issued a decree formally abolishing the death penalty in Turkmenistan which referenced “democratization of the state and public life, “the fact that the person and his life are the supreme value of society,” and “the natural and inalienable human right [to] life.” The country ratified the ICCPR Second Optional Protocol on January 11, 2000. 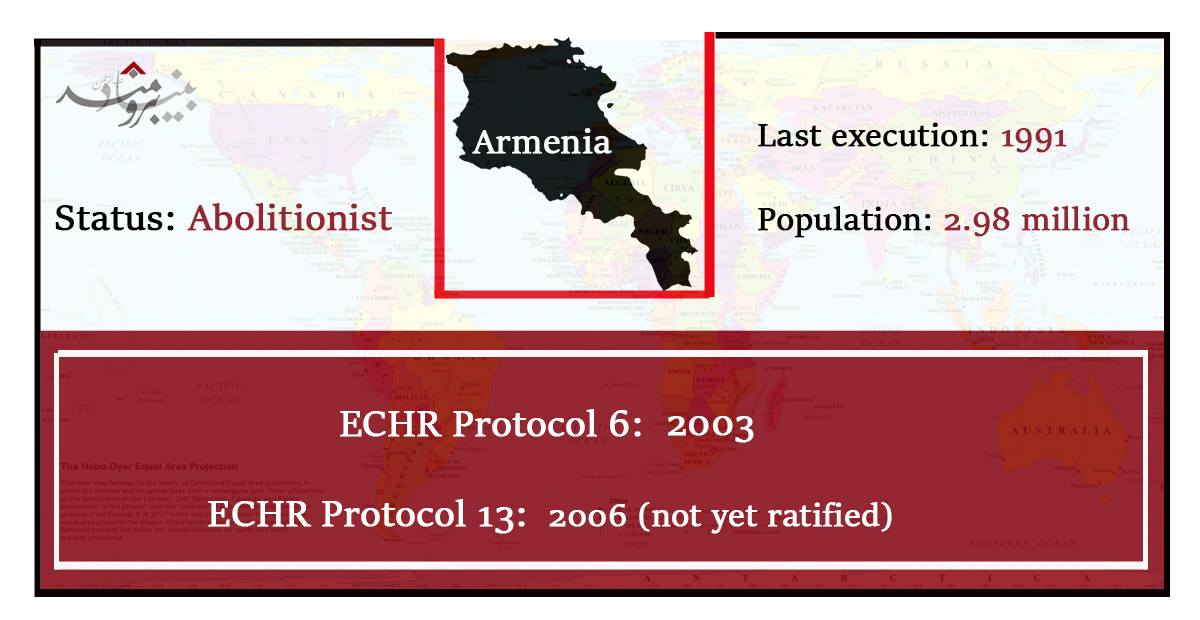 Iran's Caucasian neighbor Armenia hasn't executed a single person since 1991. In 2003, it abolished the death penalty outright while ratifying Protocol 6 of the European Convention on Human Rights. It signed ECHR Protocol 13 (which still awaits ratification) in 2006. Armenia's criminal code gives law enforcement officials the option to not extradite suspects to jurisdictions which practice capital punishment. 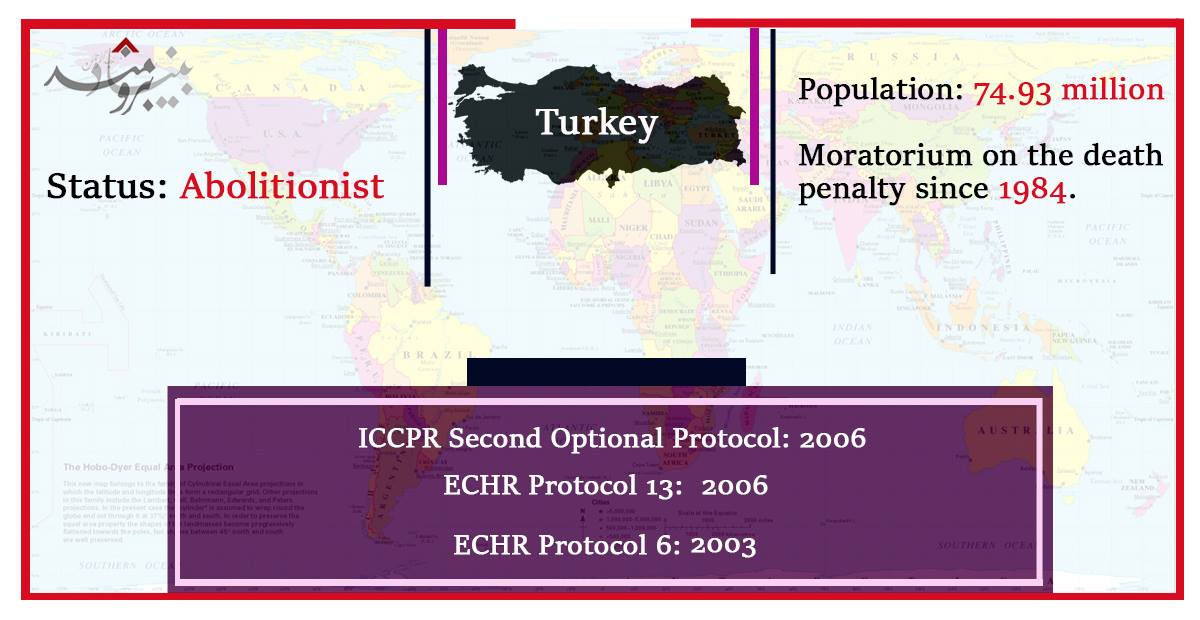 Iran's neighbor Turkey, a country of 75 million people, hasn't executed a single person since 1984. In 2002, it abolished the death penalty outright. As part of its bid to join the EU, it ratified ECHR Protocol 6 in 2003, ECHR Protocol 13 in 2006, and the ICCPR Second Optional Protocol in 2006. Though recent political developments make the future of the ban unclear, Turkey's experience with abolition proves that large, complex countries in the region are perfectly capable of doing without the death penalty. 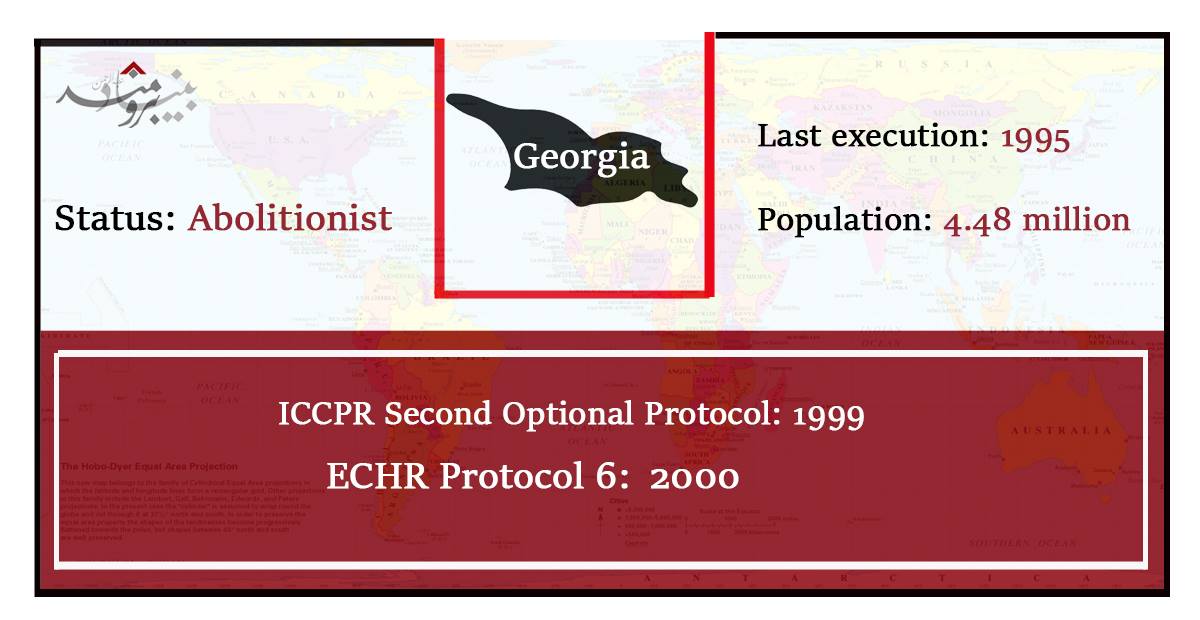 Iran's Caucasian neighbor Georgia hasn't executed a single person since 1995. In 1997, the country’s legislature passed a law replacing the death penalty with life in prison. Georgia formalized abolition in international law by ratifying the Second Optional Protocol of the International Covenant on Civil and Political Rights in 1999. It went on to join Protocol 6 of the European Convention on Human Rights in 2000 and Protocol 13 in 2003. 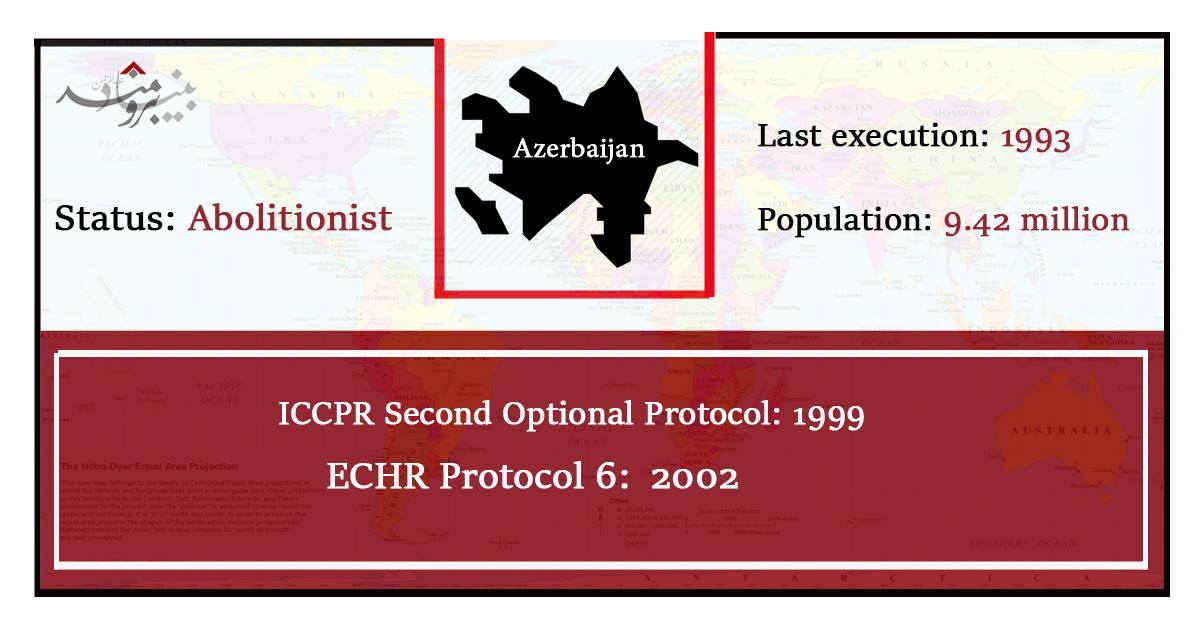 Iran's Shia Muslim-majority neighbor the Republic of Azerbaijan hasn't executed a single person since 1993. In 1998, the country’s legislature approved a measure put forward by the president which did away with the death penalty and established a maximunm criminal punishment of 25 years. In 1999, it formalized abolition in international law by ratifying the Second Optional Protocol of the International Covenant on Civil and Political Rights. Iran's judiciary is straggling behind the regional standard. Iran’s central Asian neighbor Kyrgyzstan hasn’t put a single person to death since 1998. After a pro-abolition candidate won the country’s presidency in a landslide vote in 2005, Kyrgyzstan’s moratorium was replaced by an outright ban. Article 1, Chapter 2 of the country’s constitution now prohibits capital punishment: “Everyone shall have an inalienable right to life. No one may be arbitrarily deprived of life. Death penalty is prohibited.” Iran’s Persian speaking regional neighbor Tajikistan conducted its last execution 2004. In response to lagging public sentiment, some government officials took up the cause of full abolition: “We should change the population’s opinion,” declared Jumakhon Davlatov, State Adviser to the President for Legal Policy, in 2010. Such awareness-raising work proved successful: a survey conducted in 2013 showed a majority of Tajiks in favor of full legal abolition. Meanwhile, Iranian judiciary officials try to excuse their violations of international commitments with appeals to popular support. What might they learn from their Tajik counterparts? 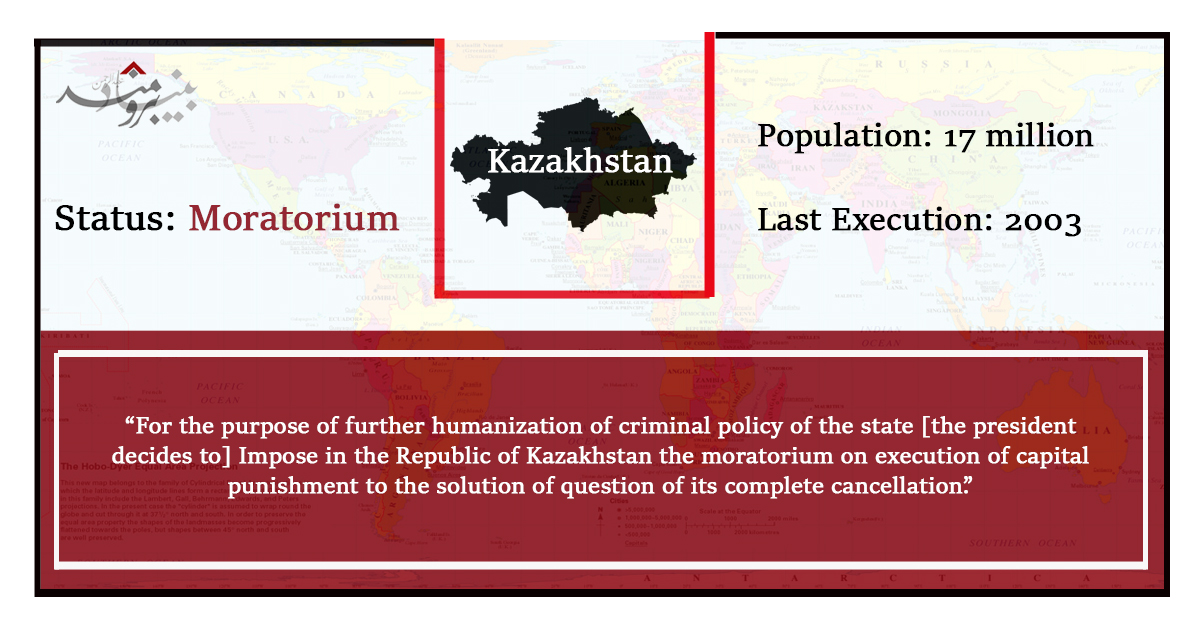 Iran’s central Asian neighbor Kazakhstan hasn’t used the death penalty since 2003. President Nazarbayev described his decree to suspend capital punishment as being “for the purpose of further humanization of criminal policy of the state” and toward the “solution of question of its complete cancellation.” Kazakhstan has voted in favor of the UN General Assembly resolution on global death penalty moratorium since its 2007 introduction. 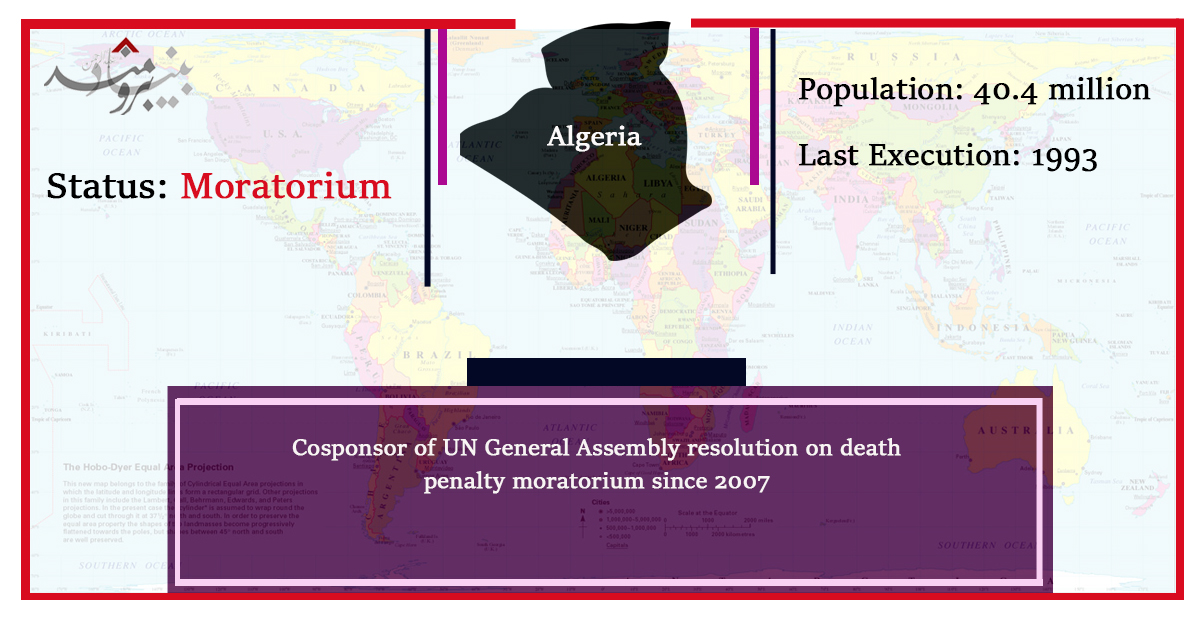 The north African nation of Algeria hasn’t executed a single person since 1993 – a year the country was in the throes of a civil war which would rage for a decade and claim the lives of tens of thousands. Algerian officials have stood firmly against capital punishment on the international stage, cosponsoring all six UN General Assembly moratorium resolutions since 2007. 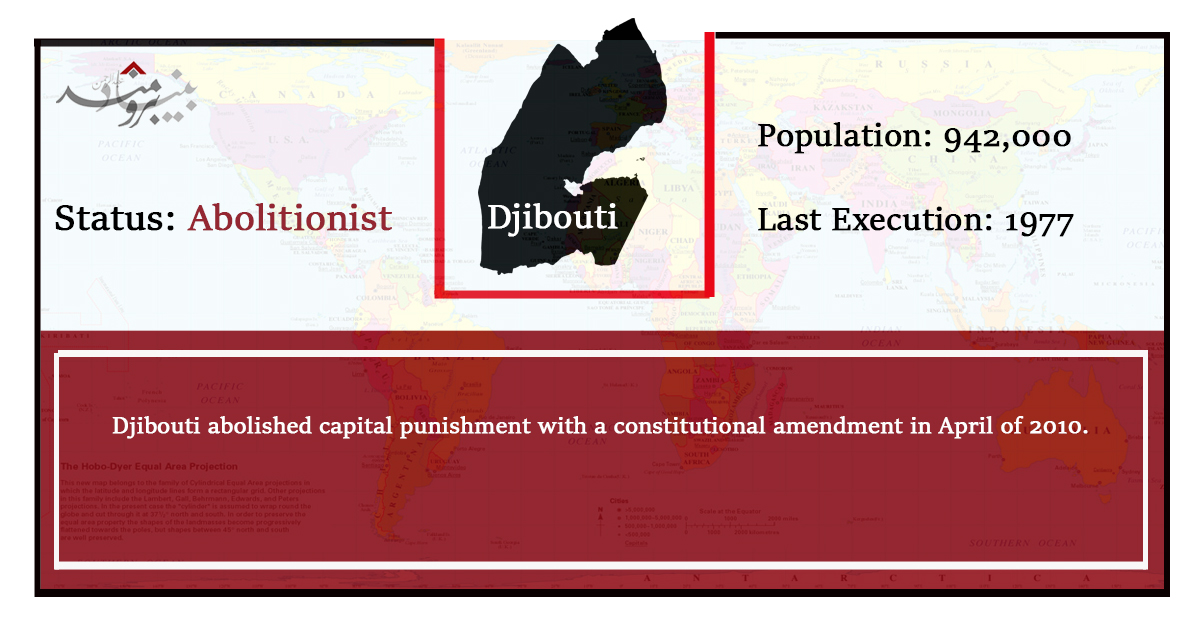 Djibouti, a majority Muslim nation on the Gulf of Aden, acceded to the Second Optional Protocol of the International Covenant on Civil and Political Rights in 2002. Eight years later, it codified death penalty abolition with a series of constitutional amendments. The country has not carried out a death sentence since 1977, the year it gained political independence from France. The Muslim-majority West African nation of Mali hasn’t carried out an execution since 1980. Since that time, successive presidents have commuted death sentences to life in prison. Mali has maintained this policy even in the face of the armed insurgency which broke out in the country’s north in 2012. Since 2007, Mali has consistently voted in favor or the UN General Assembly moratorium resolution. “Our country's high authorities, deeply imbued with values of humanism, chose not to take human life, be it that of a criminal” declared Mali’s cabinet upon approving a draft abolition bill in 2007. Morocco hasn’t carried out an execution since 1993. Though the country has yet to formally abolish the death penalty, civil society forces have lively contested capital punishment laws in recent years. The government has responded favorably to such efforts: “We are welcoming the debate around the death penalty conducted by civil society, numerous parliamentarians and lawyers. It will allow this issue to mature and be dealt with in depth” Morocco’s King Mohammad VI told an audience of abolitionists in 2014. Mauritania, a majority Muslim state on Africa’s Atlantic seaboard, hasn’t put anyone to death since 1987. The country’s criminal code, like that of Iran’s, prescribes the death penalty for non-violent “offenses” like adultery, consensual same-sex relations, and apostasy in violation of international law – yet Mauritanian judicial authorities have refrained from implementing putatively “divine law” for thirty years. Tunisia has put no one to death since 1991. Despite the challenges of a 2011 popular uprising, civil war in neighboring Libya, 2015 terrorist attacks, and the passage of a sweeping counterterror law heavily criticized by human rights groups, the country’s moratorium has remained in force. The Muslim-majority country of Bosnia and Herzegovina, an EU member, has not carried out an execution since it declared independence in 1992. Though defendants were sentenced to death on war crimes and genocide charges during the country's civil war, the Bosnia and Herzegovina's Human Rights Chamber ultimately ruled that carrying them out would violate the country's international commitments. Despite a deeply fractious recent history of ethnic cleansing and internal conflict, Bosnia and Hergezovina ratified three international instruments in the early 2000s: the ICCPR Second Optional Protocol (2001) and EU protocols 6 (2002) and 13 (2003). Albania, an EU member state with a majority Muslim population, hasn’t executed since 1995.   It introduced a moratorium on capital punishment that year following a spike in capital sentencing meant to deter crime - including the hanging of two brothers in a public square. In 1999 the country’s Constitutional Court ruled it unconstitutional. After formally abolishing the death penalty for all crimes by ratifying the European Convention on Human Rights Protocol 6 in 2000, Albania ratified ICCPR Optional Protocol 2 and ECHR Protocol 12 in 2007. No one has been executed in the Russian Federation since 1999 - and then only in the country’s restive Chechnya province, in violation of an official moratorium put in place three years earlier. In 1999, Russia’s Constitutional Court issued a ruling which did away with capital sentencing - a ruling which is still in effect. Russia has signed, though not ratified, two key international agreements banning capital punishment: ICCPR Optional Protocol 2 and ECHR Protocol 6. The country’s Presidential Human Rights Council has rejected occasional calls for a revival of capital punishment, calling it “both inhumane and ineffective.” The nation of Brunei hasn’t enforced capital punishment since 1957, a time when it was still a protectorate of Great Britain. A series of legal reforms introduced in 2014 sought to bring the country’s criminal code in line with religious law, expanding the list of capital crimes to such “offenses” as adultery, apostasy, and consensual same-sex sexual activity in violation of international law. Despite this codification of supposedly “divine” law - a move heavily criticized by human rights groups - Brunei has yet to break its half-century streak of de facto abolition.