Risk of Imminent Hand Amputation for Eight Convicted of Theft
The Clash of the Ayatollahs: A Religious Challenge to the Monopoly of Power by the Clergy in Iran
20 Years of Documentation, Thousands of Lives Saved from Oblivion
Iran’s High Council for Human Rights: A War Room of Human Rights Abusers, Mandated to Contest the Truth
View More ❯

In November 2019, Mina Sheikhi, a 59-year old Kurdish mother of six, was spending some time with her children in Tehran. She had lost her husband 30 years earlier and had raised her children alone. On November 16, Mina  was drawn to the rooftop by the noise from the protests that shook the neighborhood. She stood in the back, but couldn’t stay quiet while plainclothes individuals attacked protesters. “Shame on you!” she screamed, “Why are you beating [these people], this is somebody’s child you’re beating up. Why don’t you get lost and be gone, you cowards!” It was 9 PM and Mina put her hand on her chest. She had been shot in the chest three times from another rooftop. Mina is remembered as a fearless, joyful, exuberant, and sprightly woman.

In 1979, Mansur Qodushim (Qodooshim), a member of Iran’s Jewish community, was a successful businessman in Esfahan. He had begun working in his teenage years, after his father’s death, to feed his family. Starting as a street vendor, he owned two factories at the time of the revolution. He was hardworking and cared for his employees. He loved his country. He was executed on September 20, 1981: not because he had committed a crime, but because influential revolutionaries simply wanted to take over his possessions. Had he not questioned the confiscation of his factories, which happened without any judicial process, he might still be alive today. But he belonged to a vulnerable minority and daring to defend his rights came with a high cost.

COVID-19 pandemic has been a tragic reminder that making sense of the loss of loved ones can be difficult even when resulting from natural causes. Coming to terms with a loss arbitrarily inflicted by those in power and then forgotten by society is nearly impossible. No matter what individuals do to survive such loss and oblivion or how many years pass, they are haunted by the injustice that took away their loved one. Few really move on. Thanks to your support, we document these losses; whether they occurred recently or four decades ago. 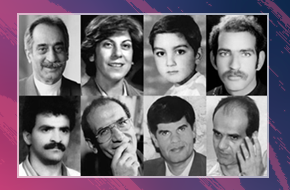 All year round, the researchers of Abdorrahman Boroumand Center for human rights in Iran carry out extensive research and reach out to victims and witnesses. They talk to children, parents, relatives, friends, classmates, neighbors, and cellmates of those who have been executed or assassinated. They share the pain and frustration of those they interview, many among whom struggle with guilt, anger, and fear. We cannot replace the love that was taken away from them. But, by documenting acts of violence and giving families, friends, and society the chance to tell their stories, we help alleviate their pain and revive their hope for justice. We remind their abusers that their crimes are not forgotten and that they will be held to account. We shed light on what went wrong and engage society in thinking about laws and safeguards that protect them from violence and abuses of the state.

Fifteen years ago, in January 2006, we launched Omid Memorial Database with 9000 victims of executions and arbitrary and extra-judicial killings. We have so far documented and acknowledged the loss of over 25,300 Iranians and non-Iranians alike. We have made a difference in the lives of those left to carry their memories and shed light on many unreported cases of human rights violations. Your support has given us the strength to persist, despite the many obstacles in our way. Thank you.