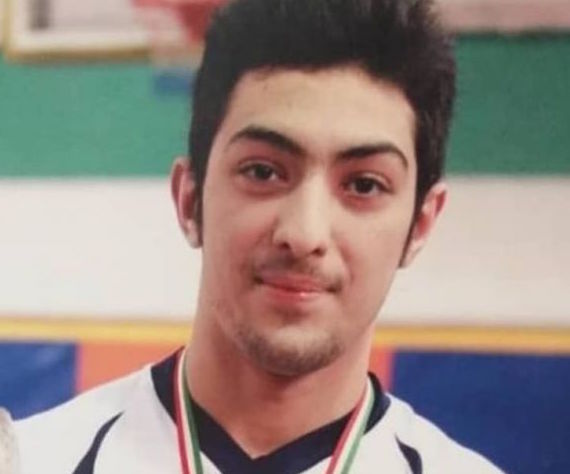 The death sentence issued in the case of Mr. Arman Abdolali, a juvenile defendant incarcerated at Rajaishahr Prison in Karaj who was scheduled to be executed at 5:00 AM on Wednesday, January 1, has been stayed after a one-month reprieve was obtained from the parents of the victim, Ms. Ghazaleh Shakur (1). Mr. Abdolali, born on March 7, 1996, is accused of having killed Ms. Shakur, his girlfriend, at his family home on March 3, 2014, when he had not yet reached the age of 18. Ms. Shakur’s body has never been found (2).

Abdorrahman Boroumand Center for Human Rights in Iran (ABC) notes that capital punishment is both illegal based on international law and, in light of scientific findings, unjustifiable for individuals who have not reached the age of 18 at the time of committing a crime. International human rights laws, including Article 6 (5) of the International Covenant on Civil and Political Rights, and Article 37 of the Convention on the Rights of the Child, strictly prohibit the death penalty for individuals under the age of 18, who are considered to be children. Iran’s parliament has ratified both of these documents. Furthermore, scientific research shows that the human brain does not fully develop until at least the age of 18. At this stage of development, individuals have less control over their emotions and lack a precise understanding of the dangers and consequences of their actions than adults (3).

Additionally, Mr. Abdolali was denied due process and his confession, while in detention, to having committed murder cannot be used as a basis for the issuance of a death sentence. He spent 76 days in solitary confinement, and according to his statements at trial, he was tortured while undergoing interrogations. There is no information as to whether or not he had access to an attorney during detention and while being questioned by the Investigating Judge. Based on information obtained from other cases, however, as well as from the testimony of defendants, attorneys, and certain Iranian officials, access to an attorney is generally not granted to detainees during interrogations (4).

No precise information exists regarding Mr. Abdolali and Ms. Shakur’s relationship, the content of their text messages, and their phone calls on the day of Ms. Shakur’s disappearance. In his initial statements, Mr. Abdolali stated that Ms. Shakur died when she slipped on the steps of the house; however, as interrogations progressed, he admitted that he had pushed her, as a result of which her head had struck the corner of a bed (5 and 6).

Mr. Abdolali’s trial took place in the fall of 2015 and winter of 2016 at Tehran Province Criminal Court Branch Four (7 and 8). At trial, Mr. Abdolali denied his secondary statements to the effect of “being the principal in the murder” of Ms. Shakur, and stated once again that the victim’s cause of death was falling on the steps (9 and 10).

In December 2015- January 2016, Tehran Province Criminal Court Branch Four sentenced Mr. Abdolali to “Qesas of life” (“retribution”) – the death penalty. The Court cited the Medical Examiner’s opinion which had confirmed in October-November 2014 that Mr. Abdolali was mentally and psychologically sound and was developed and mature enough to distinguish right from wrong; his second confession before the Investigating Judge that he had pushed Ms. Shakur and struck a blow to her head; the crime scene re-enactment; and other evidence. It is not clear what standards the Medical Examiner’s Office used in order to determine Mr. Abdolai’s mental development and maturity (11).

Mr. Abdolali’s confession to “being the principal in the murder” of Ms. Shakur cannot form the basis for the court’s ruling considering that, pursuant to Article 218, Note 2 of the Islamic Penal Code, a confession can be the basis of a court ruling only when made before the judge rendering the decision in the case. In this case, Mr. Abdolali denied his confession at trial. Furthermore, two of the judges issuing the initial ruling wrote a letter in which they expressed doubts about the accuracy of the ruling they themselves had issued.

Considering that Mr. Abdolali is charged with having committed a crime when he was under the age of 18 and was considered to be a child pursuant to international laws ratified by Iran; as well as the breach of due process and the principles of fair trial in the adjudication of Mr. Abdolali’s case; the ambiguities in the case file; lack of access to an attorney in the investigation and interrogation phase; and the claim of having been tortured by the police while in the Criminal Investigation Bureau’s custody; Abdorrahman Boroumand Center expresses deep concern regarding breach of Mr. Abdolali’s right to life, and demands the overturning of the ruling and a new, open, and fair trial taking into account the prohibition of capital punishment for defendants under 18 years of age. Noting that Mr. Abdolali was kept in solitary confinement for 76 days and was tortured and beaten to make a self-incriminating confession, Amnesty International asked Iranian officials to stay his execution (14). Amnesty International stressed in its statement that “Arman Abdolali’s trial was grossly unfair and the police investigation was flawed” (15).

At least four individuals who were under the age of 18 at the time of the commission of the crime were executed in 2019. According to Abdorrahman Boroumand Center’s report entitled “Children, Yet Convicted as Adults”, as of May 2019 there were at least 85 juvenile defendants in danger of being subjected to capital punishment in Iran (16).

(2) Mr. Abdolali and Ms. Shakur had met in March-April 2012 during a recreational trip to Turkey, and their relationship had continued through phone calls and in-person meetings. According to the Police Criminal Investigations Bureau’s report, 13 text messages and one phone conversation were exchanged between Ms. Shakur and Mr. Abdolali on March 3, 2014. There is no information regarding the contents of these exchanges (Sazandegi newspaper, January 2, 2020; Shahrvand newspaper, December 31, 2019; Etemad newspaper, December 9, 2015; Iran newspaper, September 30, 2015; documents available at Abdorrahman Boroumand Center).