20 Years of Documentation, Thousands of Lives Saved from Oblivion
Iran’s High Council for Human Rights: A War Room of Human Rights Abusers, Mandated to Contest the Truth
Women and Iran’s Death Penalty: An Invisible Reality
Without a Definitive, Coordinated Response from the International Community, Iran's Violence Abroad will not Cease
View More ❯

Mahdad (Shahu) Malahi, an ethnic Baluch citizen and adherent of Sunni Islam, is in danger of being executed, his death sentence on the charge of intentional murder having been upheld by the Supreme Court in September 2019. Mr. Malahi is married, with two children, and is from Kargan in Hormozgan Province.

Mr. Malahi is accused of killing two border patrol officers of the Islamic Republic of Iran Police Force (IRIPF) on June 11, 2019. According to official reports, the IRIPF Coast Guard (Border Patrol) learned of the presence of traffickers in goods in the waters of the Minab region. According to these sources, “on June 11, 2019, Coast Guard officers were dispatched to the Minab region and having identified the traffickers in goods, ordered them to stop. The traffickers, however, engaged the officers”. Two IRIPF officers were killed in the skirmish. According to these sources, the individuals responsible for the incident, who were announced to have been three “traffickers in livestock”, among them Mr. Malahi, were immediately apprehended. (1 and 2)

Less than two months later, on August 1, 2019, Hormozgan Province Criminal Court One, found Mr. Malahi guilty of “intentional murder” and the “principal person responsible” for the killing of the police officers, and sentenced him to “two times Qesas (death) by hanging in public in the county where the crime took place, that is, Minab”. He was also sentenced to six months in prison for “disobeying the orders of the police and for unauthorized possession of firecrackers”. (3) Approximately 2 months later, the Supreme Court upheld Mr. Malahi’s death sentence in September 2019. (4)

In an interview with Abdorrahman Boroumand Center, an eyewitness who was on his own boat at sea at the time of the event, dismissed the official account of the incident and the occurrence of a skirmish, and emphasized that the Coast Guard (Border Patrol) officers had not issued a stop order: “Early morning, two border patrol parties went toward Mr. Malahi’s boat that was carrying 15 sheep to be sold in Oman’s Port of Khasab. One of them started shooting as soon as they got close to him. Mr. Malahi had not noticed the patrol boats until that very moment. When the shooting started, he (who was the captain of the vessel) and the other sailors who were with him put their heads down. That was why they had not noticed the other boat that had turned in front of them. When they saw the boat, they unfortunately ended up colliding with it because a boat doesn’t have a brake and they were speeding and could not control their vessel.” (7)

According to the person being interviewed by the Boroumand Center, Mr. Malahi has appeared before the Hormozgan Province Criminal Court at least twice; he denied the charges brought against him in the second session and stated: “I did not see the vessel I collided with. I was going my own way when the vessel suddenly appeared on my path. I tried to reduce the boat’s speed but unfortunately the boats ended up colliding.” (8) 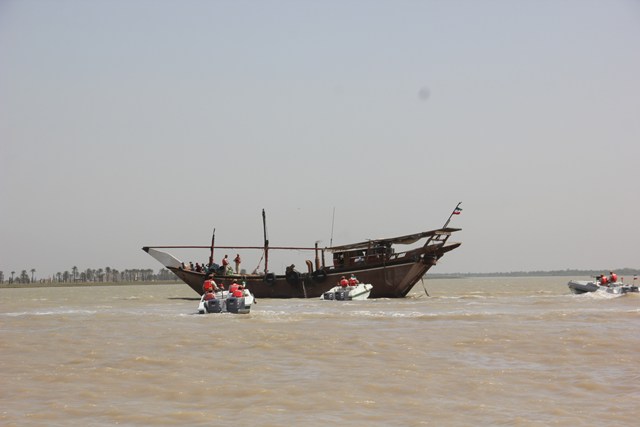 According to available information, Mr. Malahi’s family has not been able to obtain the forgiveness of the sea incident’s victims’ families in order to stop the Qesas sentence. They are worried that Mr. Malahi’s death sentence will be carried out in about a month, after the Islamic month of Safar. The IRIPF Border Patrol Commander’s presence in the region to directly follow up on the case of the death of two of his officers has made this concern all the more real. (9)

Due to poverty and lack of regional resources, Mr. Malahi, like much of the region’s residents, had engaged in the business of his forefathers, trading livestock and foodstuffs with Oman. According to the individual who witnessed the arrest, on the day of the incident, Mr. Malahi was carrying 15 sheep in his boat and intended to sell them in the Port of Khasab in Oman, and import fruit juice and tea. According to a person with knowledge of the case, the only profession the Iranian government authorizes the locals to engage in is fishing, a profession which does not produce much income for the citizens due to the issuance of excessive numbers of fishing permits, and lack of sufficient amounts of fish. For that reason, most of the local residents of the region engage in the traffic of goods and fuel to make ends meet. (10 and 11)

Given the violation of the principles of a fair trial in Mr. Mahdad (Shahu) Malahi’s case, including conducting summary proceedings, subjecting him to beatings after his arrest, and the torture perpetrated by the Police Force in the Minab Criminal Investigations Bureau, Abdorrahman Boroumand Center is concerned about the violation of Mr. Malahi’s right to life, and demands a repeal of the sentence, and a new, open, and fair trial in his case. Furthermore, the Boroumand Center does not consider the existing evidence regarding a skirmish between Mr. Malahi and the other people on his boat with the IRIPF officers as sufficient, and considers the Border Patrol shooting at Mr. Malahi to be a violation of both domestic and international law. The Law on the Use of Firearms by Officers of the Armed Forces in Emergency Situations provides for specific instances of where and the manner in which shots can be fired, none of which correspond to the conditions that existed in Mr. Malahi’s case, based on the available evidence. According to the evidence, it was perfectly possible to stop Mr. Malahi’s boat without resorting to firearms.(12)  International law and principles also authorize the use of firearms in certain specific instances with individuals accused of having committed criminal acts. These principles expressly state “Law enforcement officials … may use force and firearms only if other means remain ineffective or without any promise of achieving the intended result.” (13) According to available evidence, such conditions did not exist in Mr. Malahi’s case. This is not, of course, the first time Iranian law enforcement officials resort to violence in dealing with the citizens. Report from unofficial sources as well as the Boroumand Center’s own independent research indicates that more than 100 ethnic Baluch citizens have been killed in Sistan and Baluchestan Province and in Hormozgan Province in the last four years. Abdorrahman Boroumand Center research and observations indicate that most of these killings were done without prior warning and without taking into account international rules and regulations related to the use of firearms, and with disregard for the order in which shots are to be carried out, that is, firing a warning shot, shooting below the waist, and ultimately above the waist. (14)