Seven Flogged in Public in Quchan

Seven gang members who disturbed the public safety of Quchan with non-firearm weapons and shows of force have been flogged in public, according to the Public and Revolutionary Prosecutor of Quchan.

Fars News Service’s Quchan bureau reports that Prosecutor Ramezan Ali Azari told a group of reporters just before the floggings of seven persons were carried out: “Mass brawling is one of the issues which takes aim at the culture of our area, and it has unfortunately been on the upswing in the past few months.”

Azari stressed that the brawls had targeted the county’s honor, and that the judiciary would deal with these gang members in a serious way: “Quchan possesses a venerable and noble culture, and aggression and brawls must not be allowed to spread in a way that would mar this ancient culture.”

The Public and Revolutionary Prosecutor recognized the flogging of a number of the criminals as both an indication of the judicial system’s resolve in dealing with lawlessness and a way to prevent crime: “Mass brawling is a crime which targets the community broadly, and when a community gets a reputation for mass brawls, it’s an indication of society’s lack of cultivation. Thus this issue ought to be headed off.”

Azari stated that one of the most important factors behind such strife is a lack of charity among people, which incites fighting over the smallest of incidents. “If some individuals fail to respect the culture and community of the people, punishments will assuredly await them. A culture of fighting and insult is an indication of a lack of cultivation and cultural decline,” he emphasized.

The prosecutor called attention to the fact that around 70 high- and mid-level gang members in the county had been identified and pursued by the judicial system: “In the course of investigation, factors accounting for the outbreak of fighting in Quchan were made clear: a lack cultural spaces and a deficit in official attention to youth unemployment bring forth such disorder.”

The Public and Revolutionary Prosecutor said that the gang members would been monitored for six months by the county’s “Anger Room” in order to prevent further crimes. “We ought to show, with the general public taking part, that Quchan is considered a first-rate city in Razavi Khorasan when it comes to safety, and that a precondition of this is promoting social participation,” he added.

Azari related that 100 operations had been carried out in the county, and that crime had declined by 50%. “Ten gang members who took part in group brawls in four stages in recent months were pursued by the judiciary. Three of them are presently on the run,” he said.

According to the prosecutor, a sentence of 50 lashes was carried out in Quchan’s Municipal Square today for seven of the individuals. “These individuals had used daggers and knives to make a show of force. Besides the public floggings, they’ve also been sentenced to a one-year conditional suspended jail term.”

According to reporting from Rokna’s events team, a sentence of 74 lashes for seven gang members was carried out this morning in Quchan County.

Ali Azari, Quchan’s Public and Revolutionary Prosecutor, sad before the implementation that “In light of an increase in mass brawling in the city, and with the aim of preventing crime, the flogging sentence of a number of those convicted in these cases will soon be carried out in public.” He continued: “We will not permit a few to mar the honor of this city – which possesses an ancient culture and history – with this sort of disorder.” 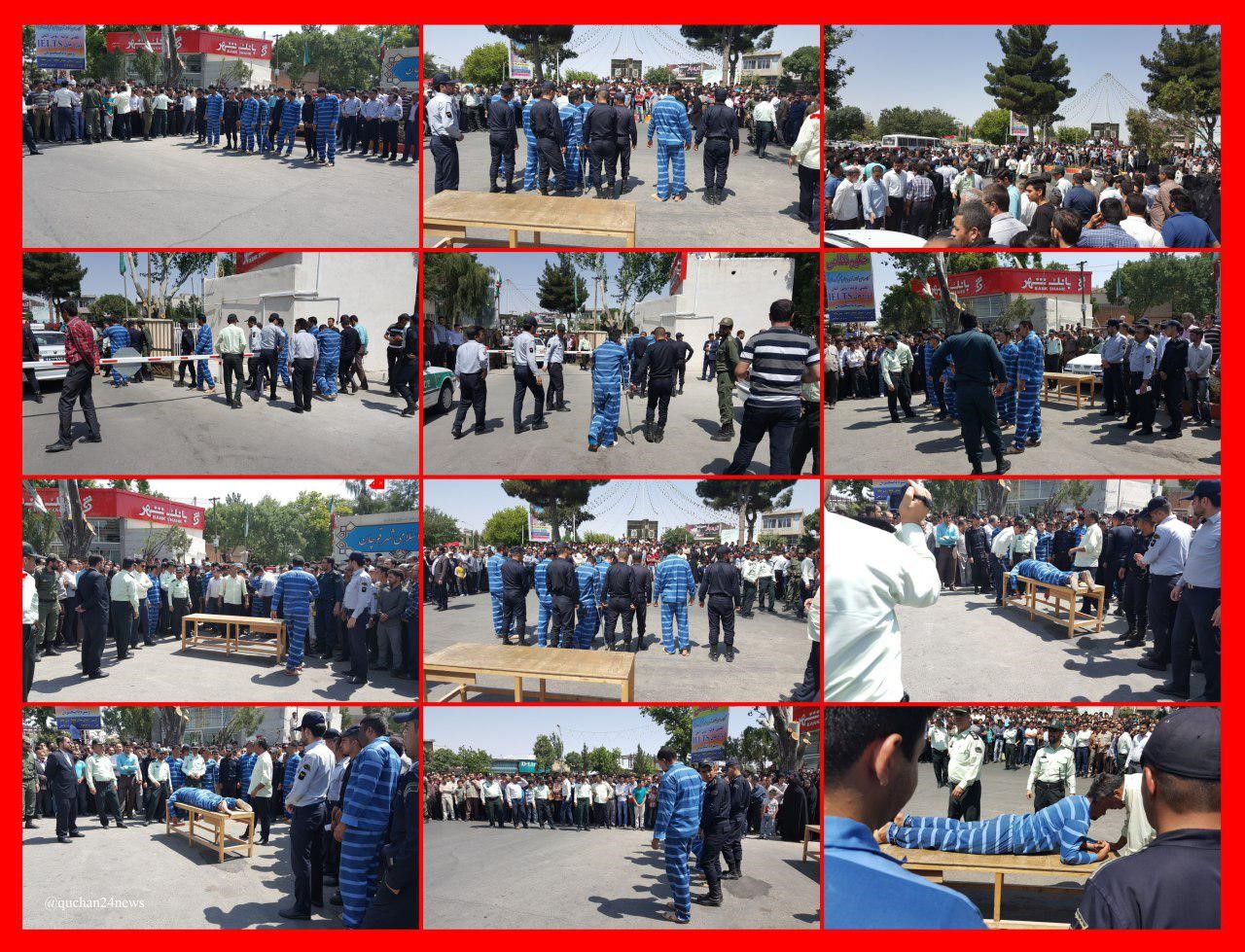 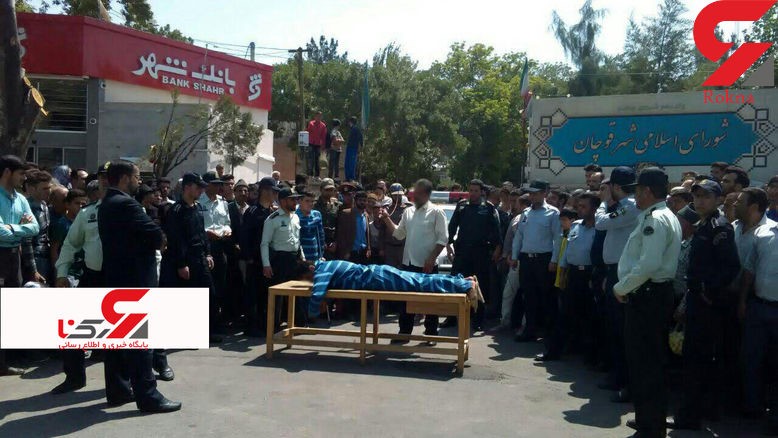 Findings of guilt in the Islamic Republic of Iran's Judicial Proceedings

The Islamic Republic of Iran's criminal justice system regularly falls short of the standards for due process necessary for impartiality, fairness, and efficacy. Suspects are often held incommunicado and not told of the reason for their detainment. Defendants are frequently prohibited from examining the evidence used against them. Defendants are sometimes prohibited from having their lawyers present in court. Additionally, confessions, made under duress or torture, are commonly admitted as proof of guilt. Because Iran's courts regularly disregard principles essential to the proper administration of justice, findings of guilt may not be evaluated with certainty.

Corporal Punishment: the Legal context in the Islamic Republic of Iran

The Islamic Republic's criminal code recognizes corporal punishment for a wide range of offenses: consumption of alcohol, theft, adultery, "flouting" of public morals, and mixing of the sexes in public. Judges have the latitude to mete out corporal punishment for those sentenced to death. In such cases, the flogging is carried out before death to maximize the suffering of defendant. Aside from flogging, the Islamic Republic also employs amputations as a punishment for theft. In such cases, the defendant is taken to a hospital and put under anesthesia as his hand or foot is amputated. In some cases the left foot and right hand are cut off, making it difficult for the condemned to walk, even with the assistance of a cane or crutches.

The use of corporal punishment is contrary to international law and is addressed in several international agreements. Article 5 of the Universal Declaration of Human Rights, which Iran has ratified, states that, "No one shall be subjected to torture or to cruel, inhuman or degrading treatment or punishment." Identical language is also used in the International Covenant on Civil and Political Rights (ICCPR), which Iran is also a party to. The strongest expression of international disapproval is contained in the Convention Against Torture and Other Cruel, Inhuman or Degrading Treatment or Punishment (CAT). This treaty defines torture as, "any act by which severe pain or suffering, whether physical or mental, is intentionally inflicted on a person for such purposes as ... punishing him for an act he or a third person has committed or is suspected of having committed." Although the Islamic Republic of Iran has yet to sign the CAT, the prohibition on torture is now considered jus cogens and, therefore, part of customary international law. Furthermore, even though the norm against corporal punishment is not yet a jus cogens, there is increasing evidence that it is illegal under international human rights law.[1] In Osbourne v. Jamaica, the Committee Against Torture (a body of experts responsible for monitoring compliance with the Convention) held that "corporal punishment constitutes cruel, inhuman and degrading treatment or punishment contrary to Article 7 of the Convention." The Islamic Republic of Iran's systematic violations of its obligations under international law have been addressed by the UN General Assembly multiple times, most recently in December 2007. In Resolution 62/168, the UN expressed deep concern with Iran's continued flouting of international human rights law, particularly, "confirmed instances of torture and cruel, inhuman or degrading treatment or punishment, including flogging and amputations."